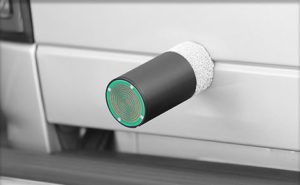 On the multiple occasions that the United States Supreme Court opined about vehicles and the Fourth Amendment, it considered competing policy interests like officer safety or an individual’s privacy rights.  These frequently clashing policy interests come to the forefront in the realm of high-speed pursuit cases with the recent popularity of the StarChase GPS launcher.[1]

A StarChase GPS launcher is mounted on the front of a patrol car and can release a GPS dart that adheres to a fleeing motorist’s car during a high-speed chase.[2]  The darts are four-and-a-half inch projectiles coated in adhesive.[3]  The GPS dart provides real-time location tracking to allow for officers to stop pursuing the fleeing car but continue tracking the suspect.[4]  The technology provides a safer way to locate suspects that flee the scene or are involved in a high-speed chase by simply taking the chase out of the apprehension.

Many police departments across the country have implemented this technology to eliminate high-speed chases.[5]  A report released by the National Institute of Justice in partnership with StarChase, LLC, revealed that more than 55,000 injuries occur per year and more than 360 officer and civilian fatalities occur per year because of high-speed pursuits.[6]  The report analyzed various test cases of the use of the StarChase GPS launcher.  The ultimate conclusions of the test cases in the report illustrated zero injuries and zero fatalities from high-speed chases after implementation of the GPS launcher.[7]

The GPS darts raise the question of constitutionality in light of a 2012 decision by the United States Supreme Court.

In U.S. v. Jones, the U.S. Supreme Court held that attaching a GPS tracker to an individual’s car and using that tracker to monitor the individual’s movement constituted a search under the Fourth Amendment.[8]  Notably, the Court cited that a vehicle was an “effect” within the Fourth Amendment’s “‘right of the people to be secure in their persons, houses, papers, and effects, against unreasonable searches and seizures.’”[9]  Thus, the Court determined that attaching a GPS device in order to track the individual’s movement was a search.

Interestingly, StarChase released a statement in 2015 regarding U.S. v. Jones and its determination that the StarChase technology is constitutional when properly used.  StarChase noted that the U.S. v. Jones Court “left open the possibility that use of a GPS tracking device on an automobile may still be a reasonable search in some circumstances, such as immediately after the commission of a crime.”[11]  StarChase stated that when the GPS launcher is properly used – when officers have probable cause that the fleeing vehicle is being used in the commission of a crime or attempted flight – the GPS launcher and tracking system is constitutional.[12]

An earlier U.S. Supreme Court case, Scott v. Harris, sheds some light on the reasonableness of an officer’s actions during a high-speed chase.  In that case, the Court held that an officer’s attempt to end a dangerous high-speed chase that threatened the lives of bystanders did not violate the Fourth Amendment even though it placed the fleeing suspect at risk of serious injury or death.[13]

In Scott, the officer applied his push bumper to the rear of the fleeing suspect which caused the suspect to drive off the road and crash.  The fleeing motorist’s injuries ultimately caused him to become a quadriplegic.  In coming to its holding, the Court placed significant weight on the interest in ensuring that officers and innocent bystanders are safe from the dangers of a high-speed pursuit.  Given the Court’s emphasis on that interest, as well as the GPS launcher’s efficacy in attaining low injury and fatality rates, it is likely that the use of the GPS launcher technology is constitutional because the technology ameliorates the dangers of a high-speed pursuit.