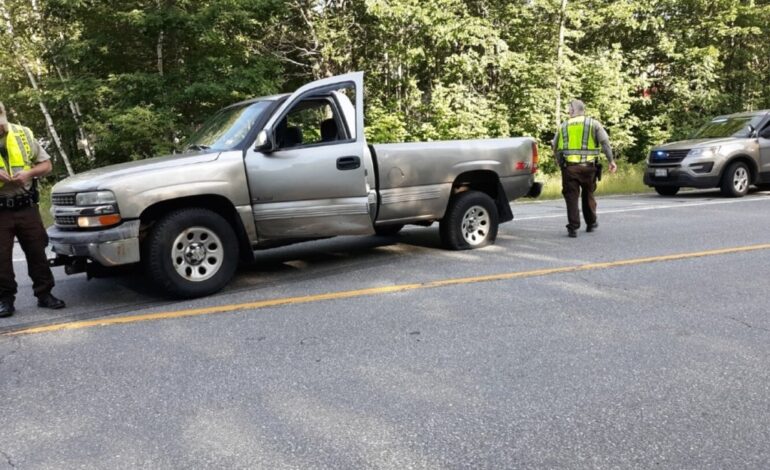 Oxford County sheriff’s deputies inspect a stolen truck driven Monday evening from Berlin, New Hampshire by a 17-year-old female. The teen led police on a 50-mile chase from Berlin and into Maine along Route 2 to Rumford. Maine State Police photo

The driver avoided at least three spike mats, struck multiple vehicles, drove through a yard and crashed through a fence before Maine State Police stopped the stolen truck in Rumford.

RUMFORD — A 17-year-old female driving a stolen pickup truck from Berlin, New Hampshire, led police on a 50-plus mile pursuit from New Hampshire and into Maine along U.S. Route 2 before Maine State Police stopped it in Rumford using spike mats.

A shattered fence lies Monday next to a home on Knox Street in Rumford, the result of a teen leading police on a chase, according to police. Maine State Police photo

According to police, the teenager — who is not being named — was driving a stolen Chevrolet 1500 pickup truck early Monday evening when she was spotted traveling through a construction zone on Route 2 in Bethel. There, she struck a vehicle and a jersey barrier and continued toward Rumford at about 5:30 p.m.

The driver avoided three sets of spike mats before getting to Rumford. There, she turned onto dead-end Knox Street and refused to stop, escaping by driving through a resident’s yard, crashing through a fence and striking another vehicle. She made it to Spruce Street and then drove back along Route 2, headed west toward Bethel.