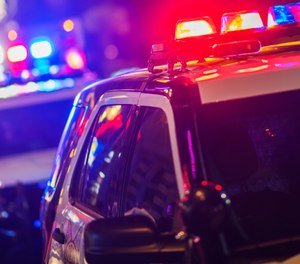 As an officer saw Arthur Lange driving, he heard loud music and horn honking coming from Lange’s car in violation of a noise ordinance. The officer briefly followed Lange, then turned on his emergency lights. Lange turned into his driveway and pulled into his garage; the officer pulled in behind him. As Lange activated the garage door closer, the officer placed his foot across the threshold, causing the door to rise.

The officer entered the garage and ultimately arrested Lange, whose blood-alcohol level was 0.245, for driving under the influence of alcohol. Lange challenged the arrest, claiming the officer violated the Fourth Amendment by entering his garage without a warrant. Additionally, Lange claimed he never saw the officer behind him.

Lange pled no contest to the criminal charges, reserving an appeal of the trial court’s denial of a suppression motion. Lange also filed a civil suit, seeking reinstatement of his suspended driver’s license. The civil court ruled Lange’s arrest was unlawful. A criminal appeals court held the officer had probable cause to arrest Lange when he pulled into the driveway and drove inside the garage after the officer had turned on his emergency lights. The court opined that the “hot pursuit” exception justified warrantless entry into Lange’s garage.

The hot pursuit exception to the warrant requirement states that a suspect may not defeat a proper arrest simply by getting home one or two steps ahead of pursuing police (United States v. Santana, 427 U.S. 38 (1976)). (Note: The Santana decision did not address hot pursuit of misdemeanor suspects.) “Hot pursuit” implies an immediate pursuit of a suspect fleeing from officers and has previously been applied to justify warrantless entry to arrest for both felonies and misdemeanors. United States v. Williams (354 F.3d 497 (6th Cir. 2003)) defined “hot pursuit of a fleeing felon” as an exigency exception to the warrant requirement. Middletown v. Flinchum (765 N.E.2d 330 (Ohio 2002)) stated officers in hot pursuit of a suspect who flees to a house in order to avoid arrest “may enter without a warrant, regardless of whether the offense for which the suspect is being arrested is a misdemeanor.”