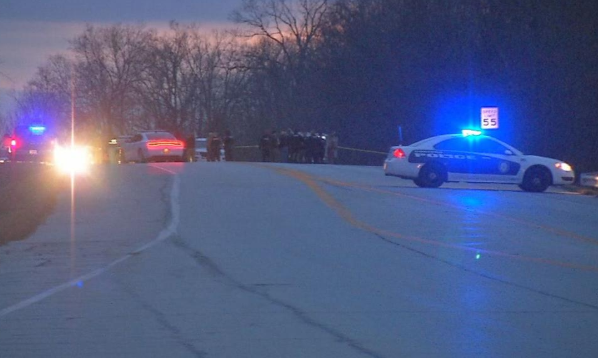 CORYDON, Ind. (WDRB) — The Harrison County Sheriff’s Office is investigating after police shot and killed a suspect in a stolen vehicle after a chase through Kentucky.

Kentucky law enforcement officers in Meade County began chasing two suspects, a man and a woman, in a stolen vehicle Sunday around 5 p.m., according to Harrison County Sheriff Nick Smith. The pursuit continued over the Ohio River into Indiana. Officers determined both suspects were armed and deployed spike strips to stop the pursuit near the intersection of Highway 62 and State Road 135 in Corydon, Smith said.

One of the suspects in the vehicle started shooting at officers on scene, who returned fire, according to Smith. The woman was killed, and the man, who was driving the vehicle, was taken to U of L Hospital. His condition is unknown. No officers were hurt in the shooting. It is unclear which department’s officers returned gunfire.

“Any time a law enforcement officer has to take the life of another, it is as a last resort and not taken lightly,” Smith said. “Our hearts go out to all of the families. It is tough on everybody’s families.”

Police are not yet releasing the identities of the suspects. Smith said more information is expected to be released Monday afternoon once an autopsy is complete.