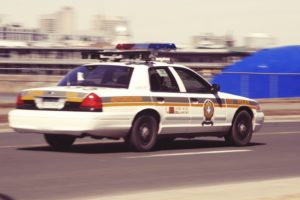 An officer in pursuit of a suspect.

There has been much controversy surrounding the need for police pursuits. Although many people believe they are the cause of unnecessary tragedy, there remains a time and a place for pursuits.

Because police pursuits can be so dangerous, numerous agencies only allow their officers to engage in pursuits if certain types of crime have been committed. There is sound logic behind these limitations on pursuits, based on research done by several organizations.

A common thread that all departments share when it comes to pursuits is how they start.

“The majority of our pursuits stem from an officer attempting to make a traffic stop based off of a traffic violation,” said Megan Morgan, assistant public information officer for the Oklahoma City Police Department Office of Media Relations.

Pursuits by the numbers

An analysis done by the IACP seems to agree with this statement. The IACP found that only 9 percent of police chases were directly linked to violent crimes. In their analysis, 42.3 percent of pursuits were due to traffic violations, 18 percent due to a suspected stolen vehicles and 15 percent based on a suspected intoxicated driver. The vast majority of police pursuits therefore involved nonviolent suspects.

Because pursuits can be very dangerous to officers, suspects and citizens, the cause of a pursuit is an important factor. The same IACP report found that 23.5 percent of the pursuits studied ended in a collision, injury or property damage. One in 100 pursuits resulted in a death.

A BJS report found more than 7,000 fatalities in pursuit-related crashes during the period studied, from 1996 to 2015. That averages to about one death each day. This suggests that while it may be justified to engage in pursuit for more serious crimes, for lesser crimes the risk may be too great.

Once a pursuit has begun, it is very difficult to control the factors that may lead to injury or death. What can be controlled is the initiation of a pursuit, which indirectly affects the rate of injury and death. By controlling the number of pursuits, departments can limit the danger to their officers and bystanders.

At some point, any patrol officer may be involved in a high-speed pursuit. Departments can impleent specialized policies in order to cover the tactics of pursuit as well as rules to govern when to initiate or become involved in them. While some departments have taken to a “no pursuit” policy, others have introduced specific guidelines that specify the criteria for beginning a pursuit as well as tactics they may use in order to have a successful and safer outcome.

In 2009, the Newark PD in New Jersey updated their policies, guidelines and procedures involving pursuits. The department adopted rules that include initiating a pursuit only if the officer believes the person in the vehicle has committed a violent crime or if the perpetrator poses as an immediate threat to the public or other officers.

In addition, Newark PD officers must keep in mind other factors before becoming involved in a pursuit, including the area in which the pursuit may take place, the weather and safety of the road conditions and the overall safety of the public.

The Lincoln County Sheriff’s Department in New Mexico only pursues a subject if they that person has committed a felony. In addition, each pursuit requires two units, as well a supervisor, to be alerted of the event. Deputies are told to disengage a pursuit if it becomes too dangerous the public.

The Oklahoma City PD has specific guidelines for when an officer may engage in pursuit. Additionally, their policies are designed to help officers balance the apprehension of a subject while considering overall public safety.

Some departments are turning to alternatives to police pursuits, such as GPS tracking tags. In such a situation, fleeing suspects would be tagged with a GPS device that the officers can track and follow safely and accurately.

A pursuit is intended to apprehend a criminal. Once a pursuit begins, it is imperative that officers adhere to their department’s procedures, especially keeping in mind the safety of others on the road. Apprehending a subject in a pursuit involves careful consideration of each factor in a department’s policy, current weather and road conditions and the severity of the infraction.