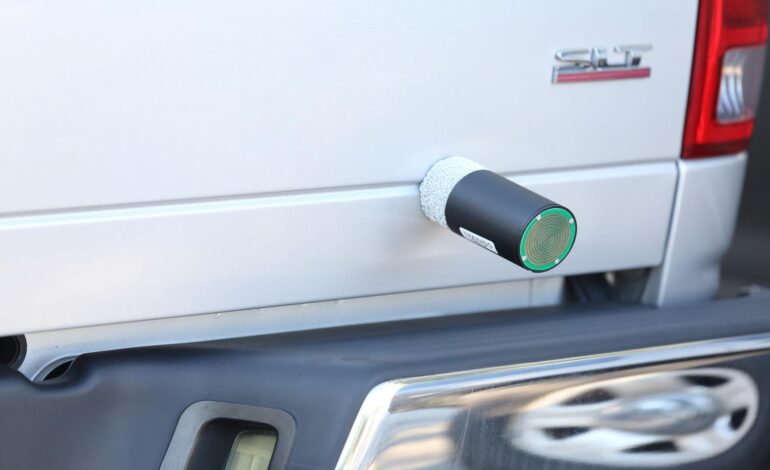 In North Carolina, the Mooresville Police Department has joined the list of agencies deploying StarChase GPS technology to safely capture suspects without the need for an often-deadly high-speed pursuit. The StarChase technology is mounted behind the grille of a police cruiser and enables police with the ability to launch a GPS tag onto a suspect vehicle and track the vehicle via a secure map. From a push of a button an otherwise high-risk event is transformed into a slower more manageable event that reduces risk and significantly increases community safety.

The technology is stealthy so as not to alert the suspect and the GPS Tags can be deployed using handheld launcher as well.

“You’re probably not going to hear it tap the back of your vehicle,” said Mooresville Police Corporal Jeff Noble.

StarChase’s GPS technology was reviewed and given broad support “approval” by the American Civil Liberties Union (ACLU) in cases of exigent or probable cause situations.  Further, North Carolina Law Enforcement is legally allowed to pursue and track suspects both physically and digitally. Noble said the goal of the technology is to keep people safe while reducing damage to police cars and private property.

“We’re all about being as safe as we can. There is always a risk in pursuits, and we are aware of that,” Noble said.

So far, the Mooresville Police Department has equipped a few of their vehicles with the technology. Depending on how successful it is, they’ll add more.

MPD Chief Ron Campurciani said that the Mooresville Police Department is the first in North Carolina to embrace the technology.

“When a pursuit or drive-off seems imminent, officers can deploy a Vehicle Mounted GPS Launcher Tag from their patrol vehicle instead of engaging in a high-speed pursuit. The vehicle data can then be monitored by law enforcement, even across jurisdictional boundaries,” MPD said in a statement.

StarChase is as much a tool as it is a safer mindset that allows for a higher level of community safety and safe capture without the loss and carnage. Simply put, StarChase provides LE the ability to rewrite often tragic outcomes with outcomes that are safe, controlled, and strategic, while improving community safety.

According to StarChase’s website, the technology has been deployed over 10,000 times and recovered millions of dollars in assets. StarChase partners with companies like Amazon, Google and Microsoft, and its technology is patented.