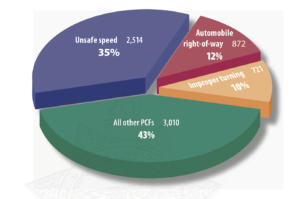 As noted by California’s Commission on Peace Officer Standards and Training (CA POST) in their 2009 Driver Training Study, speed was a contributory factor in 83 percent of law enforcement traffic fatalities during their study period (and the primary factor more than a third of the time).

As for negotiating right of way, CA POST found:

Right-of-way issues and turns typically occur at intersections. Intersections have consistently been identified as danger points for traffic collisions. Officers routinely have to negotiate intersections under emergency conditions, which increases the collision potential.

As we’ve noted in the past, a well-implemented LEDS (“Law Enforcement Driving Simulators“) driver training program can go a long way in addressing the hard and soft skills vital to high-speed police driving. According to CA POST, simulator training programs have also been shown to “[reduce] the number of critical errors committed at intersections–errors that lead to loss of control and consequent accidents–by more than 67%.”

CA POST concluded that “the Sacramento PD program is a notable program because it has achieved significant results without an increased budget or staffing. Savings from reduced civil liability losses offset extra training costs. This program also illustrates the benefits of blended refresher training (20 hours every 2 years).”

The Fire Department of the City of New York (FDNY) began relying more heavily on LEDS-based training in the early 2000s. Specifically, they aimed to increase driver safety among their ambulance drivers. (EMTs face many of the same driving risks as on-duty police officers, especially at intersections.) In the three years following FDNY’s implementation of a LEDS program, they saw a steep reduction of intersection collisions—even as call volume and the number of units on the street steadily increased.

“While there could be confounding factors in each of these examples,” CA POST concluded, “it appears that their success (with collision reductions) has been realized as a result of changes in their training programs.”

FAAC Incorporated is the leader in simulation training solutions. Our high fidelity simulators provide an unmatched level of realism that immersion, allowing users to experience real world conditions and events.  Find us online at www.faac.com