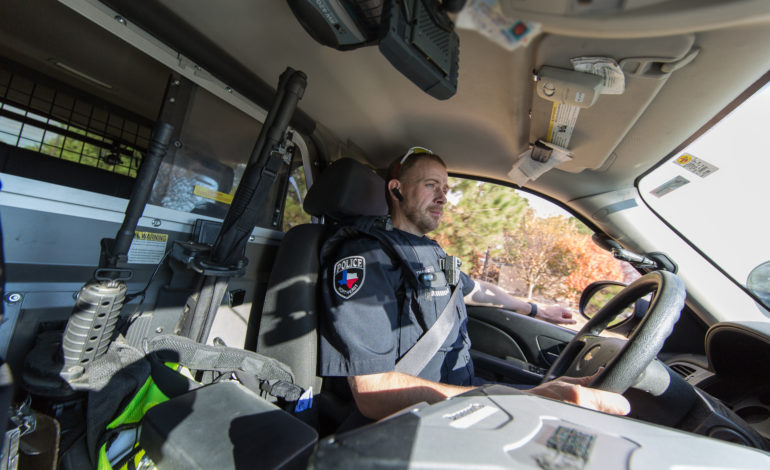 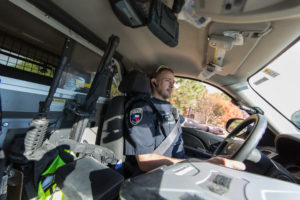 Technology can be used to improve driver performance and safety. (Photo/PoliceOne)

Car crashes were the second leading cause of U.S. police fatalities between 2008 and 2017, second only to gun-related deaths. Of the 1,511 law enforcement deaths over that 10-year period, 364 officers were killed on the road, according to the National Law Enforcement Officers Memorial Fund (NLEOMF).

At least some of these deaths were related to driving at high speed, with risks potentially exacerbated by police cars suffering from mechanical and maintenance issues. Other deaths were due to officers not wearing seat belts.

In a report released in 2016, NLEOMF noted that of the 167 fatal automobile crashes between 2011 and 2015, officers were not wearing seat belts in at least 38 percent of crashes.

There is a way for police departments to make officers safer on the road, and it is called “telematics.”

Telematics is a vehicle-based car monitoring system that keeps a constant eye on the car’s performance and driver decisions using a set of onboard sensors located on and in the vehicle.

Items that can be monitored by telematics include:

Periodically, this data is transmitted by the vehicle’s cellular telephone link to an external server or cloud storage system such as the kind used by OnStar to monitor passenger vehicles and trucks, and by FedEx and UPS to monitor their fleets.

The data is then correlated with each of the vehicle’s users and analysed to create individual driver profiles. The results provide police commanders with precise, accurate histories/assessments of their officers’ driving habits and risk-taking behaviors – and proof as to whether they are wearing their seat belts.

Of course, not every officer likes the idea of their driving habits and seat belt usage being tracked, recorded and compiled. But those who aren’t doing anything wrong have nothing to fear.

The upside: Telematics can also be used to provide data proving the innocence of responsible drivers beyond a shadow of a doubt. This matters during routine driving duties and high-speed pursuits where officers may have to justify their driving decisions after the fact.

How ‘being watched’ makes officers safer

Most officers will tell you, knowing they’re being watched is often enough deterrence to make potential perpetrators behave themselves.

The same is true for drivers of telematics-equipped vehicles. Even the most rebellious of drivers are more likely to drive safely and wear their seat belt knowing their bosses are monitoring.

There is no doubt that police commanders need to know the driving habits of their officers, given how much can go tragically wrong when a person drives faster than their ability to control their vehicle. One wrong move can affect the driver, passengers and anyone in the vicinity.

When poor driving goes unchecked, it can lead to horrific fatalities that scar the department and the community. Police-caused auto fatalities can ruin lives, generate costly lawsuits and damage the department’s vitally-important public reputation.

Telematics can provide commanders with the tools to address such problems proactively, specifically by motivating their officers to drive more safely on the road.

And make no mistake: The technology works.

In addition to potentially improving safety, telematics can reduce operating costs, vehicle emissions, and identify fraud and waste, according to a 2015 analysis prepared for the City and County of San Francisco Board of Supervisors.

“Once the system was implemented they reported that over half of the deputies dropped their incidents of unjustified high-speed driving to zero, and the rest had two or fewer incidents.”

Other benefits of telematics

Assuming telematics exist for commanders to play “Big Brother” misses the point of this technology, and the many benefits it can provide to officers in their cars.

For instance, the same sensor technology that monitors how each car is being driven, also keeps a close eye on vehicle maintenance and operating faults. If this data is automatically relayed to the department’s automotive service division and used to schedule maintenance, it would mean better-maintained, more reliable and more responsive police cars on the road. Better-maintained cars are safer for officers to drive, and less prone to get into crashes.

The data gathered by telematics can also help teach officers more fuel-efficient driving strategies, which would mean lower fuel costs. Less money spent on maintaining a fleet of cars could mean more funds available to the department for other things – including measures to enhance officer health and safety on the job.

When used in real-time mode, telematics can help police departments monitor their cars on an ongoing basis, and spot officers who may need assistance. Dispatch can be alerted immediately if an airbag deploys in a car, sending life-saving help without delay.

The bottom line: Telematics saves police lives. This technology truly can keep officers safer in their cars and keep the public around them safer as well.