According to POST (California’s Commission on Peace Officer Standards and Training), California law enforcement are injured in roughly 700 automobile collisions each year. Conventional wisdom holds that it is younger officers who get into the most high-speed pursuit accidents, either because of inexperience, poor judgement, poor control of their emotions, or a combination of all three. But is this true?

While we now have a better understanding of what policies, training, and equipment can reduce officer injuries and deaths due to assault, research into officer vehicle collisions is scant. That said, most current research indicates that age does not seem to be a primary factor. Neither the oldest nor youngest officers form the bulk of those killed in the line of duty during high-speed pursuit or in another traffic-related incidents.

According to the data included in POST’s 2009 Driver Training Study, between 1990 and 2004 the average age of an officer killed in the line of duty while driving was 37. Similarly, in a 2011 report, the U.S. Department of Transportation’s National Highway Traffic Safety Administration (NHTSA) reported that, when broken out by age group, officers 30 to 39 years old accounted for the largest percentage of law-officer traffic fatalities nationwide. (This finding was based on their analysis of the FBI’s Law Enforcement Officers Killed and Assaulted data, cross-referenced against their own Fatality Analysis Reporting System (FARS) database. [source])

Scott E. Wolfe and his team reported similar findings in their 2015 article “Characteristics of Officer-Involved Vehicle Collisions in California”:

“The examination of officer age is interesting given that conventional wisdom among law enforcement officers and administrators is that younger officers are responsible for most traffic collisions. Counter to this belief, these data reveal that the majority of collisions involved officers between the ages of 30 and 39 (44.7 percent). While not trivial, only 24.5 percent of officers involved in such collisions are in the youngest age group (20-29) in our data.” (source) 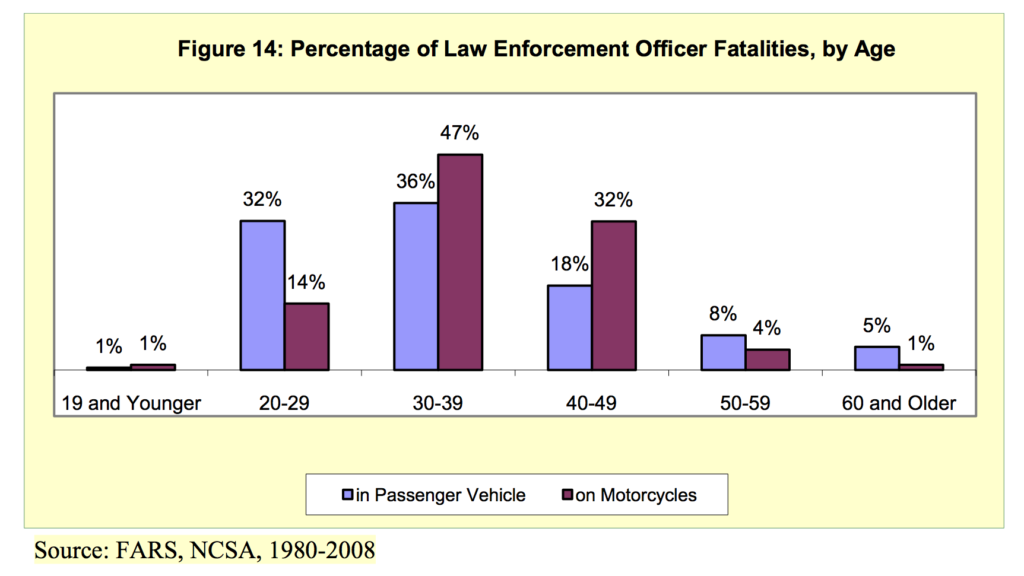 This chart shows the distribution of law enforcement officers killed in vehicle accidents while on duty from 1980–2008. (source: “Characteristics of officer-involved vehicle collisions in California,” U.S. DoT NHTSA, 2011)

Although age does not seem to strongly correlate with the incidence of collisions while driving, there is some indication that experience does. As Major Travis Yates found in his independent study of law officer vehicle crashes: “It is absolutely apparent that experience plays an integral key in the safety of officers as it relates to vehicles. Fifty-eight percent of the officers that died [in Yates’ analysis] had less than five years of service as a law enforcement officer. In fact, 32 percent of the officers had less than 23 months experience, while six officers had just a few months experience.”

Yates concluded that “the lack of experience of those killed in vehicle collisions and the fact that most states train their new officers in driving tells us that training alone in an academy setting may not be enough. Regular training combined with experience is the key.”

But which is the greater factor in saving lives: Training or experience? After all, we have some indications that more experienced officers are more desensitized to how fast they’re driving. How can we train proper “experience” without desensitizing officers?

Note that POST, NHTSA, and Wolfe all found that officers 30–39 years old were the most likely to be injured or killed in a crash. POST further found, upon more detailed analysis, that while for some periods it was California’s less experienced officers who crashed, that was not always the case. For example, in the 1990s POST found that roughly 70 percent of the officers killed in car crashes had less than five years’ experience. But in the early 2000s, the average officer killed in a crash had 12 years of experience—almost twice as much road time.

POST’s data on the impact of training is less equivocal. According to POST, we can expect 52 percent of all officers to get into a collision. But of those officers who receive any additional driver training after leaving the academy, just 47 percent are in an accident. Five percentage points might seem like a small reduction, but represents hundreds of sworn officers spared injury—and possibly death—each year.

This tends to imply that the solution is not just a matter of improving our approach to high-speed pursuit training programs.  We also need to spend more time training and retraining our most experienced drivers.